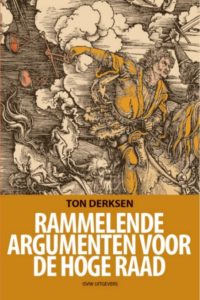 Ton Derksen is the author of a recently published a book called Rattling Arguments for the Dutch Supreme Court.

Huseyin Baybasin, is a Kurd from Turkey. The Kurds are an ethnic minority in Turkey and have been battling for an independent state for decades to no avail. That is why he and others set up the Kurdish Parliament in Exile in the Hague in 1995. The Turkish state was outraged. Working together with the Dutch police, they tapped Huseyin Baybasin’s telephone. Actually the tapping had already started earlier when Baybasin was still in Turkey.

Daphne: Ton, as a Professor of Philosophy of Science, you have been working with people who are wrongly convicted in the Netherlands. Previously you worked on the case of Lucia de Berk and now it is the Baybasin case. Why is Huseyin Baybasin wrongly convicted, in your opinion?

Ton: 90% of the ‘evidence’ consists of telephone taps and the content of the crucial telephone taps has been manipulated. There is the additional problem that the translators of the telephone conversations have cheated by adding false incriminating sentences. All the evidence on which Baybasin has been convicted is fabricated. This is really a case of ‘making a murderer’.

Daphne: How is it possible that this has not been noticed before?

Ton: In the revision request the evidence has been presented but its exculpatory nature has simply been denied and turned around. For example, there is a tap on which Baybasin is supposedly informed that some murder has been committed. But the next call makes it clear that it is not a murder that they were talking about. They spoke about a peaceful event. Then (Prosecutor) Aben reacts ‘Yes, it seems like a peaceful event, but Baybasin really talks about a murder. So whatever you say, it’s always about murder. In this way the prosecution creates its own evidence.

Daphne: So all the evidence is based on telephone taps that you say are badly translated and …

Ton: They have been deliberately mistranslated and the mistranslation is always incriminating for Baybasin.

Daphne: We asked you to bring an example of the telephone taps with you to explain what you meant. What is this tap about?

Ton: Mr Aben now admits that it has been wrongly translated but still he finds a way out: True — so he acknowledges — , Baybasin says “to make him call”, but — so Aben “knows” — Baybasin’s English is so poor that he really meant to ask his friend to make a call, by which Baybasin means to say that his friend should visit someone, and — so Aben adds — by a visit, Baybasin means a visit to liquidate. No matter what Baybasin says, in Aben’s interpretation he always ends up talking about a liquidation.

Daphne: That is what I found very disturbing about this book of yours. How the facts are reinterpreted. That is, if one’s mind-set is that Baybasin is the killer, all the facts can be turned around into that direction. So, this was one example, do you have another one?

Ton: There is also a malicious translation of “Goodnight as Good Evening.” I explain. Baybasin is called and informed about some event that, according to the court, must be a murder because that murder was committed at 4 pm Baybasin was called at 5.16 pm. According to the court, this is shortly after the murder and hence very incriminating.. We asked a Kurdish expert to listen to the spoken words and he heard that Baybasin and his interlocutor do not say “Good evening”, but “Good night”. You don’t say “Good night” before 10 p.m. And 10 p.m. is not ‘shortly after’ 4 p.m. Yet, one of the reasons why Baybasin was convicted was because he was (allegedly) called shortly after a murder. But 10 p.m. is not shortly after the murder. This is another wrong and translation that is used by the court as incriminating material against Baybasin.

Daphne: So there is no explicit reference to ‘murder’ in the telephone taps such as “Did you kill him for me?” or “Would you want to kill someone for me?” Or anything like “Did you sell the drugs”?

Ton: No, no. Another example. Baybasin was a businessman and he signed many contracts. For Aben ‘signing a contract’ is suspicious. Aben hears someone laugh and he then “knows” that it was not a normal business contract but a contract to kill someone.

Ton: Yes, and note that in this way, whatever you do, you have always committed a murder.

Daphne: Is this case based on this kind of fake evidence?

Ton: Yes, not only in this example, but in an endless series of other instances. Against Aben the defence has hundreds of counterarguments that all disclose the innocence of Baybasin. Aben has no case, his strategy is to get rid of exculpatory evidence by giving it an incriminating interpretation: Baybasin meant to say something else. Aben’s strategy is to claim: ‘What is said looks exculpatory but that is not what Baybasin meant to say.” But this is just a cheap trick to create a murderer.

Daphne: According to you, both the Dutch and the Turks would benefit if Baybasin stays locked up. What are the Turks’ motives?

Ton: I understand the position of the Turkish government somewhat. In his youth Baybasin worked for them. He noticed that certain officials were involved in the narcotics trade. That was later confirmed. If you out such a story, your government will not be pleased. He was put on a hit list and eventually Baybasin fled the country. Afterwards the Turkish government tried to get him back in Turkey. They actually spent a lot of money to catch him.

Daphne: Yes, but why should Dutch judges cooperate with this?

Ton: There are a number of reasons. At the time, the Dutch police were working together with the Turkish police to fight the narcotics trade and they were highly successful. So when the Turkish police come up to you and say, “Look, here we have another drug dealer”, then you will be inclined to believe them. Moreover, for the police it is very difficult to catch a criminal and if a socalled criminal is handed to you on a silver platter it is very tempting just to say ‘thank you!’

Daphne: Then one already has tunnel vision?

Ton: Yes, the judges had received false and manipulated evidence. The problem is they find it very hard to believe that the police would cheat over the evidence. They just cannot believe it. Lawyers know this and they will not use the word ‘lies’. This word makes a judge very uncomfortable. So a judge has great difficulty imagining that all of the material in the Baybasin case has been manipulated. And once a court has ruled, it is very difficult in the Netherlands to reverse a sentence. Then reputations are at stake and everyone prefers to stay out. No changes anymore, please. The person convicted must be the perpetrator. Mr Aben has done his job. He has rubbed away all exculpatory evidence: he has transformed it into incriminating evidence – not by means of argument but by means of tricks that make sure that he will always be right. The goal is clear: Baybasin must stay in prison.

Daphne: Frans, you were the Regional Prison Governor including of Heerhugowaard Prison where Baybasin was imprisoned for three years. It is remarkable that prison officials are committed to a prisoner in this way. When did you realize that this man was unjustly imprisoned?

Frans: That has been a slow process. As a regional governor of prisons you only restrain people under detention and are not really concerned with the why – that is up to the judge. Obviously, a lot of stories went around about the case – not only about the phone taps but also about the cell searches that were made without knowing who gave the order for it. So there were rumors going around in the system about Mr. Baybasin. I also got to know him personally. That also makes a lot of difference if you judge a case. The most important competence that you as a prison governor, as well as staff on the floor must have is that you learn to trust your own intuition and judgment about people and learn to act accordingly. So I got to know Mr. Baybasin both inside the prison, but especially outside the prison, as a man like me, in the same age group – someone who is honest and respectful towards everyone. There is also nothing known in his file that he has ever done anything wrong while in prison.

Daphne: Your intuition is extremely important for the work you do. But in the book it also concerns hard facts. What appealed to you most in Ton’s book?

Frans: I can imagine that mistakes can be made, especially when political motives play a role. What shocked me most is the fact that despite the first two books, one is actually deaf to the arguments and that the advisor to the Supreme Court is still writing an advice that entirely rattles on all sides. Yes, that is in fact unimaginable and, yes, not looking at the mistakes you have made and to treat a human being like this with an irreversible life sentence! That touches me enormously: For 40 years I have worked within this system. Justice stands for integrity and for a constitutional state. When you see this happen, you cannot keep your mouth shut.

Ton, in response to your book, parliamentary questions have been asked about this by the SP (Socialist Party). Today the MPs went back to work so a response will come in soon. What do you hope to happen?

Ton: Of course, I hope that the Supreme Court will keep its cool and reject the negative advice (of Aben) and come to a positive decision.

Daphne: Exactly, Mr. Baybasin requested a review of his trial: Advocate General Aben has prepared a negative conclusion of 1730 pages. He claims that a revision is not necessary. You hope that they still include your book in the assessment?

Ton: Yes, but the attention of politicians and the media is incredibly important too. There are lots of strong arguments for Baybasin’s innocence, but if people do not want to listen to them, arguments are not enough.

Daphne: Yes, and this is important to all of us because it ultimately concerns the rule of law and how we can be trapped on that basis.